18th Century Life is a group of friends who share a passion for the 18th century. Based in Arizona since 2004. Our members portay personas from various countries such as France, England, Scottland, Spain, and Colonial America ranging from civilians to soldiers to aristocrats. We welcome anyone who is interested in joining us in our fun and educational endeavors. If you have a passion for the 18th century and are thinking of participating in any of the events we are a part of, please contact us via email at dj18thcentury@yahoo.com All we ask is that you be respectful and considerate. You do not have to be a history major or dedicate your very being and essence. After all this is a hobby. We can tell you what it takes to get started and what you will need to know before getting involved. -Your humble servant, Le Compte- 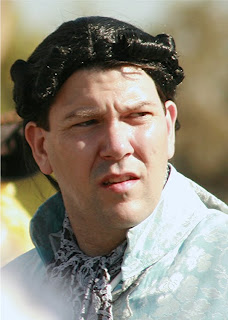 Hello All, For some time now I have been considering starting a blog where I can talk about one of my biggest interests and hobbies, 18Th century reenacting. So much has transpired over the few years of reenacting that my family has been involved in. We have made many wonderful friends along the way. My wife and I (the lovely Comtesse) have shared a passion and interest for the 18Th century through out our 16 years together. In 1994 my wife and I tied the knot. We wanted to have a full 18Th century wedding, but were unable to afford anything in those days. We made due the best we could. We decided that we wanted it to be a masquerade ball type atmosphere. What better way to have that than to get married on Halloween. It was, after all, our favorite holiday and would give our guests a reason to dress up in costume as well. We were fortunate enough to have a family friend donate untold hours of labor to make my wife her first ever 18Th century gown for her wedding dress, and the same seamstress converted my rented tuxedo into a make shift pseudo-18Th century suit, complete with lace cuffs and cravat. We have always loved costumes of all sorts but it has always been the 18Th century that captivated us both. In our first years together the option for 18Th century reenacting did not exist, at least not in our former residence of South Lake Tahoe. In fact we do not think that it existed anywhere. Renaissance faires and Celtic festivals served as our outlet in those days. We enjoyed the camaraderie of the highland clans and followed as fans for a time a wonderful, though now defunct, Celtic band called Clan Na Gael. Eventually we had kids, I started a career in sales, and reenacting sort of fell by the wayside, especially the "remote" idea of 18Th century reenacting. Fast forward to: Nov 2005 (now living in Gilbert AZ)....I remember coming home one day from work and my wife was nearly overwhelmed with excitement. She had come across a group of reenactors called the 1745 Jacobite Society who participated in an event called the American Heritage festival. They were a group centered around the 1745 Scottish rebellion against the English. They invited us to be part of their encampment provided that we came in costume. It was 2 weeks before the festival, we did not have costumes, my wife had never sewn anything in her life, in fact we did not even own a sewing machine. But we saw the opportunity we had always dreamed of, to live our passion for the 18Th century. So I bought my wife a $79 singer sewing machine from Walmart (which she use to this day...one day I will by her a nice upgrade...one day) and she set about sewing our first 18Th century costumes. The rest is history. 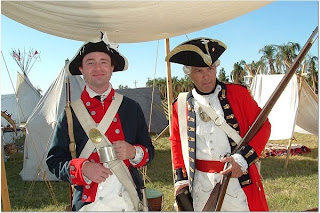 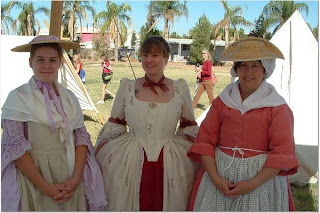 The American Heritage Festival (see http://www.americanheritagefestival.com/ ) was/is an incredible event. It was at the American Heritage Festival (AHF for short) that we came into our own. It turns out that my wife has an amazing talent for designing and creating period costumes. So much so that at the encouragement of several of our friends and family who were so taken aback by her creations, she has turned it into a business. http://www.timelessdesignsfashion.com/ (check out more at the gallery: http://www.flickr.com/photos/timeless_designs/ ). It was also at AHF that the idea of 18th Century Life was conceived. Over the years the AHF has brought us into company of a group of like minded individuals who also share a passion for 18Th century reenacting. We all decided to give our group a name to create a focus for organizing events related to 18Th century reenacting. We decide upon the name "18Th Century Life". Currently the organization is a loosely organized body of tightly knitted friends. We keep in touch through emails, blogs, and occasional gatherings. We are based in AZ with members from all over the the Phoenix area as well as Tucson. If you are in the area and want to reach out to us, email me at dj18thcentury@yahoo.com. Or maybe you can check us out at AHF or one of the other events put on by We Make History such as the balls. What?...I didn't mention We Make History...??? That is because there is so much to tell about the marvelous reenacting group "We Make History", and how they have changed our lives, that I will have to write about that in another post. For now the story must wait. I must bid farewell. -Le Comte-